This section documents the development process for 802.11 and the trees used.

Patches for the 802.11 subsystem must be sent to John and posted to the linux-wireless mailing list. For details of the patch format review the patch submission guide for 802.11 and our git guide. Once posted the patches will go through a review process by the community. Anyone can post comments regarding your patch, you should try to be responsive and address any questions asked.

Your e-mails and replies to e-mails should use bottom posting style for replies. HTML e-mails are rejected by the linux-wireless mailing list so be sure to use plain text.

The diagram below illustrates the chain of how patches get into Linux for 802.11:

(Note: This diagram is out of date, some arrows are just wrong, e.g. wireless-next feeds wireless-testing, not the other way around) 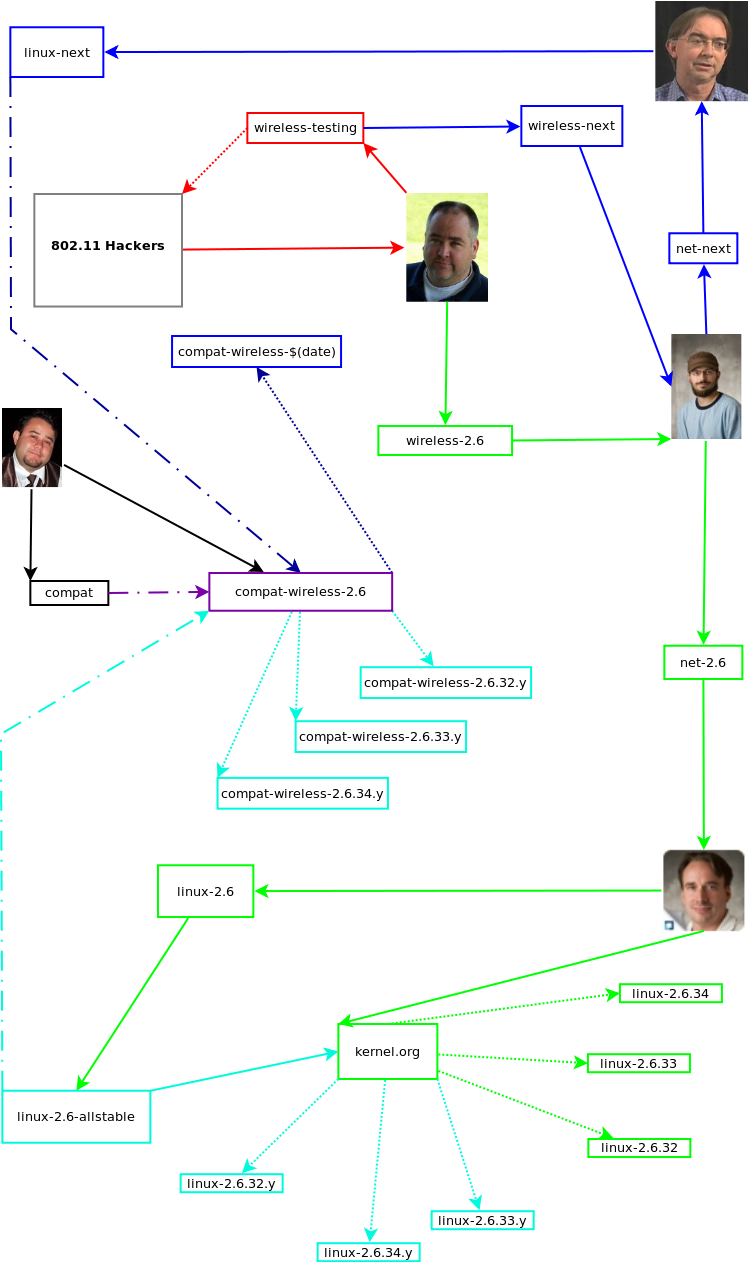 We detail below the maintainers an 802.11 patch usually goes through for inclusion into Linux.

Linus maintains the Linux kernel as a whole. He receives patches from every major subsystem, a couple relevant examples are patches from David Miller for the Networking subsystem and patches from Greg Kroah-Hartman for the USB subsystem.

Linus makes stable kernel.org releases based off of this tree:

Stephen maintains a tree to help with the testing of patches which are to be eventually sent to Linus Torvalds for the next kernel release. If kernel.org indicates the latest stable kernel is 2.6.33 it means that the patches in Stephen's linux-next.git are patches which will likely end up being sent to Linus Torvalds for inclusion into the 2.6.34 kernel release.

Amongst other things David maintains the network subsystem for the Linux kernel. All networking subsystem maintainers send patch updates to David, this includes the 802.11 maintainer and the Bluetooth maintainer.

Relevant trees to 802.11 that David maintains:

John W. Linville is the Linux kernel 802.11 subsystem maintainer. As a maintainer he reads all patches posted to the linux-wireless mailing list, and once ready merges them into the development and stable trees.

The wireless-testing.git tree is a git tree that provides developers the chance to use a bootable kernel based on Linus' tree with all new 802.11 development patches. John merges first the wireless-2.6.git tree into this tree, and then merges the wireless-next.git tree into it. He resolves all conflicts along the way.

The history in wireless-testing is dirty. It contains crap like reverts only so that John can continue to pull cleanly from wireless-next-2.6 and wireless-2.6 even after John has had to rebase those other trees. The reverts are done so that developers can use a linear tree, so you can simply git pull or git rebase on origin/master and continue with your development. Without these arrangements John would have to do lots of pointless fixups in a tree that will never be pulled by Linus anyway. The ugly history is the alternative to rebasing, so that those who pull or rebase on origin/master can do so without git complaining.

The point of wireless-testing is to provide something between linux-2.6 and linux-next, something that is close to the stabilising release but with currently pending wireless patches. It is not intended to be a basis for historical research. Don't use it for that.

Developers should work off of this git tree for all 802.11 development. Developers can simply pull the tree for new updates if no changes have been made committed locally. If you do have changes committed locally you can rebase your tree on top of John's by doing the following instead of pulling:

Detailed changes for this tree:

Johannes maintains the cfg80211 and the mac80211 components of the 802.11 subsystem. This means patches for either mac80211 or cfg80211 should be addressed to him and that he will pro actively review them.

Each driver has its own set of maintainers and patches for each driver should be sent to them as well. These driver developers will pro actively review patches posted. See the 802.11 driver maintainers page for details.