IEEE-802.11 was designed with power saving in mind for stations. This section tries to summarize what the standard defines for all aspects of power saving. It's a work in progress.

To assist stations with power saving, Access Points (APs) are designed to buffer frames for a station when that station is in power save mode and to transmit them later to the station when the AP knows the station will listen. When a station is in power save mode, it turns off its transmitter and receiver to preserve energy. It takes less power for a station to turn its receiver on to listen to frames than to turn it its transmitter on to transmit frames. For this reason, it's more power-efficient for an AP to inform a station if it has buffered frames present on the AP than to have the station poll the AP querying if frames are present.

During association, a “Listen Interval” field is provided by the station. The listen interval is given in beacon interval units, so essentially it tells the AP how many beacons it wants to ignore before turning the receiver on. Two bytes are used to represent he listen interval. Depending on how the AP is tuned, usually based on the amount of space desired for buffered frames, the association may or may not be rejected. After the listen interval the AP does not guarantee it will buffer frames for the station anymore and may discard them. As might be expected then, the listen interval can be used by the AP as a guaranteed maximum time before stations listen to one of their beacons.

This is what the TIM information element looks like:

The last 7 bits of the Bitmap control represent the bitmap offset. To best describe length and bitmap offset, let us just quote the relevant section:

To better illustrate this let we provide an image: 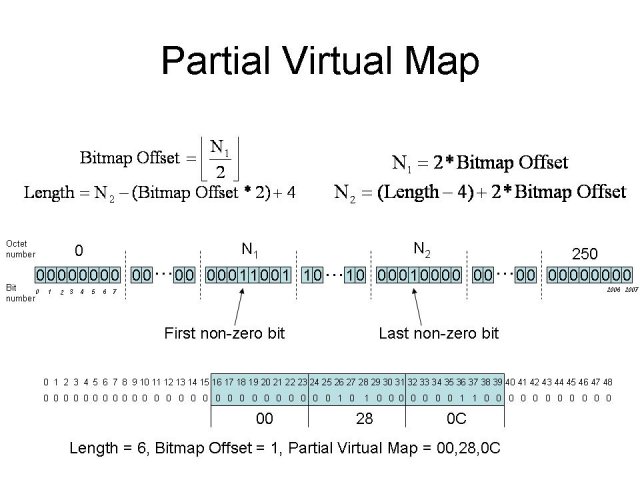 If no station has unicast frames buffered on the AP, the partial virtual bitmap is encoded as a single zero-filled byte and the bitmap offset is set to zero.

After a station receives a TIM and if its sees that the AP has buffered frames for it, it must send a Power Save Poll (PS-Poll) control frame to retrieve each buffered frame on the AP. A station may go back to sleep after the PS-Poll ↔ frame exchange or once the TIM no longer has its AID present.

We use a special type of TIM to to announce that the AP is about to transmit all buffered broadcast and multicast frames called the Delivery Traffic Indication Map (DTIM). After this DTIM the AP will send all buffered broadcast and multicast frames. The DTIM will be sent every DTIM period. The DTIM period is set on the TIM information element on the DTIM period field. This field is one byte and represents the number of beacon intervals that must go by before a new DTIM is sent. The DTIM count on the TIM information element tells stations how many beacons must be transmitted before receiving the next DTIM. The DTIM count will be 0 when we've reached a DTIM.

Some devices can be configured to ignore the DTIMs, and this is sometimes considered as additional power saving mechanisms with different marketing names.