Typically, wireless devices have four queues for the different access categories, and additionally buffer somewhere for aggregation in HT mode. For background information on how the queues are numbered, look at en/developers/Documentation/mac80211/queues. Queue selection is done by looking at the packet contents and putting the packet into the right AC according to its IPv4 ToS markings, and to allow the administrator to override this, the skb→priority field may override this. We were discussing this in the context of “tc” and at some point this will likely change to be more flexible. 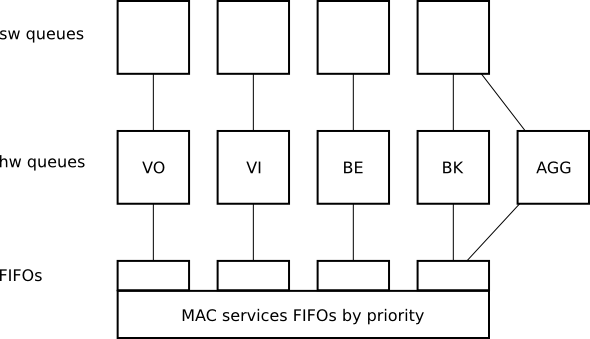 The FIFOs are typically shallow and only used to buffer DMA latencies. In any case, they typically can't be changed anyway.

Aggregation might collect up to 64 frames into a single aggregate, and all those frames must be on the queue first, so those queues should be allowed to get a fair number of frames to allow forming aggregates most effectively; note that some drivers limit the aggregate length to less than 64 (iwlwifi, for example, currently limits it to 31).

If a wireless device operates as an access point, it can be transmitting to multiple stations at the same time, at very different speeds. If, for example, the link to some station is really bad, a single short frame to it might take more time than a number of longer frames to another station that has better signal.

Aggregation is controlled by driver (ath9k) or the device (iwlwifi). There's a potential delay there – packets may be held in preparation for aggregation for some amount of time before they are transmitted so that they can be aggregated at all – if they were just put into the device queue on ath9k they'd all be sent one by one. For iwlwifi the device makes aggregation decisions, but it needs to have a number of frames in the queue to make good ones. However, this complicates estimating the queue airtime since the aggregation decisions aren't known to the driver and the airtime heavily depends on them.

It should be possible to dynamically change the size of the internal driver queues based on specific parameters. Specifically one current idea is to use a new adaptive algorithm to change the buffer size. This is being reviewed but patches and other ideas are welcomed.